Iran and Ukraine usually make headlines because of internal or surrounding turmoil, but the arts are bringing hope to the people affected by the conflict. Sarah Carabott spoke to three individuals who are raising awareness about social issues through filmmaking.

If films were made about the effects of war, there would be less people who would resort to conflict, according to Iranian film director Mansour Forouzesh.

“Cinema could bring peace in some countries, such as the Middle East. Through film we could expose the social consequences of conflict, such as immigration, the realities of injured and homeless people and the results of chemical bombing.

“If those who started conflicts were made aware of the results of war, they would not go to war. We need to tell the story of refugees, because in reality no one wants to leave their home, and people should not continue to be forced out of their country,” Mr Forouzesh said.

The young man, who has lost two uncles and an aunt in the Iran–Iraq War, believes that the world can be changed through the arts.

He was speaking to this newspaper accompanied by Ukrainian film director Igor Parfenov and actress Ellen Slusarchi during their stay here to take part in the seventh edition of the Malta Short Film Festival organised by Tony Parnis and Joyce Grech.

The final event will be broadcast on TVM this Friday at 9.50pm and the awards will include a special prize by Matthew Martino Benevolent Fund, a UK-based international charity.

While Mr Forouzesh was one of the festival’s foreign jurors, Mr Parfenov and Ms Slusarchi’s The Dependants, based on Anton Chekhov’s short story, is one of the nominated short films. Mr Parnis believes that unlike Hollywood blockbusters, short films push people into thinking about social issues.

In a recent feature film, called Once upon a time in Ukraine, Mr Parfenov focused on Euromaidan, which was a wave of demonstrations and civil unrest in Ukraine between November of 2013 and February 2014.

Asked why he chose to direct such films, he simply said: ‘Because I cannot not do it’

One of the protagonists is played by Ms Slusarchi. Her character was kidnapped and raped by policemen who had killed her best friend, and she turned up at the protest asking who was going to be next victim.

Another protagonist, Mr Parfenov’s own friend, featured as a disabled war veteran with no means of survival. The veteran, Alexander Jahno actually lost his own son in an explosion at the Donetsk airport last year. 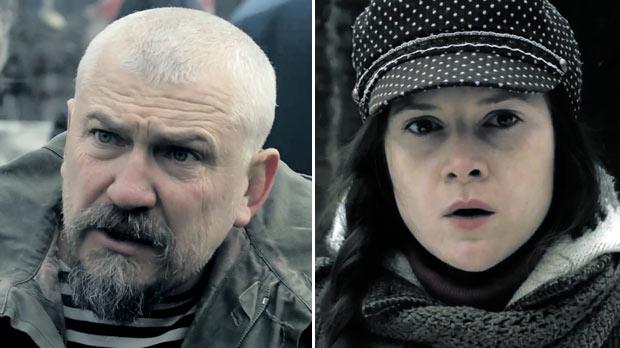 Left: Igor Parfenov and Ellen Slusarchi (right) in Once upon a time in Ukraine.

Asked why he chose to direct such films, he simply said: “Because I cannot not do it”.

Ms Slusarchi explained that people in power were not aware of the daily life and problems of civilians, and they wanted to open their eyes through cinema.

Asked why she opted to appear in such movies rather than commercial ones that would leave more money in her pockets, she said she was not just an actress.

“I am firstly a human being and I want to do something to make the world a better place.”

Both she and Mr Parfenov are members of the animal rights campaign Peta, while Mr Forouzesh is a volunteer at the Tehran Peace Museum.

The three believe that cinema and such festivals brought people from different countries together as cinema opened borders rather than closing them.

“If I was a politician and my government had an issue with Ms Slusarchi’s government, we would not be sitting next to each other and talking as we are doing now. But because we are artists, we can discuss such issues and understand that we are both human beings,” Mr Forouzesh said.